Hello beautiful bookworms, and welcome to my Time Weaver: Heart of Cogs blog stop! Today I’m sharing with you an excerpt from this steampunk novel. To read some reviews, interviews, and guest posts for this book, please do visit the other blogs in this blog tour! You can find them here. 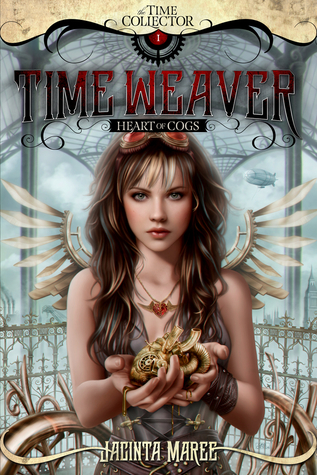 I have a clock for a heart…and the man who put it there tried to take it out.

Time Collectors are modern day genies capable of exchanging wishes for time. Elizabeth Wicker lives within a steampunk world riddled with the supernatural. Among the stories of witches, Bacts, and other monsters, Time Collectors remain as the greatest hushed secret among the noble families. They are temptation’s greatest tools. A contract with a Time Collector is a guaranteed death sentence, and for some the price isn’t worth the prize. But when Elizabeth is struck down by a fatal heart attack, she finds herself trapped beneath a Time Collector’s blade. With no time left to offer, she makes a desperate sacrifice for a second chance at life. If there’s only one truth, it is a Time Collector will always come back to collect.

“He’s here for you again, Elizabeth.”

Tightness gripped her, reeling Elizabeth backwards. As with each visit, the clock in her head started its count down. Don’t let it be today. Please, not today. With a gulp, she peered out the window where, from their second-story drop, she could see Arthur Beaumontt step out of his car.

Anxiety bubbled. Oh, please, not today. Arthur Beaumontt lurked around the corridors of her school just as often as her nightmares. It became so frequent she didn’t know which one was the reality. At this moment, it didn’t matter. He was here.

Elizabeth feigned a laugh. “Impossible. He can’t be here for me. My bidding isn’t until next week.”

The girl gave her a one-shouldered shrug. “Looks like you’ll be getting that rope necklace sooner than you thought.” She turned and walked off with the rest of the girls in tow.

Elizabeth pulled back from the window in fear of Arthur looking up and spotting her, plagued by the thought of her hanging, neck cracked, from the ceiling. Belonging to the Academy of underprivileged ladies had saved her from the streets and brothels, but had perhaps also delivered her to a far worse evil. An evil called Arthur Beaumontt.

“What are you doing standing about?” A shrill voice came up from behind. One of the teachers swiped Elizabeth across the back of the head. Elizabeth fumbled with her mop and bucket. “Get back to work.”

“Sorry, mistress.” Sweat teased Elizabeth’s hair, sleeking white loose strands to the curve of her neck. The clock kept ticking down, always aware that her life could change at any devastating moment. She hoisted the bucket higher and fleeted down the hall. In a week, she would turn eighteen, and as school policies dictated, she would be sold to one of the noble houses. A personal maid, a thing, a piece of property, to a wealthy household. Being trained for a life of servitude swelled her ankles, burnt her fingers, and pulled her muscles to exhaustion. But she would never complain as the alternative was a reality best ignored. The Beaumontts were the power among the nobles, and it was seen as improper to buy anything the Beaumontts wanted. So, if Arthur wanted her, he was going to get her. End of story.
Elizabeth disappeared down the corridors with her fellow students, becoming a single blotch of pale blue among the sea of identical dresses. From behind, a hand spun her around. She should’ve known it was him the moment he touched her. His hot hands were always sweaty.

“Why is it every time I see you, you seem to only get uglier?” A smirk curdled his mouth. Arthur Beaumontt, a boy dressed in his father’s wealth, chuckled without any hint of joy. He always said such things. Called her ugly. Worthless. Unwanted. Behind her back, she could hear the hallways emptying, the rest of the girls sheltering behind closed doors.

In her surprise, Elizabeth’s voice trembled. “You’re not allowed up here, this area is off limits.”

“Don’t be stupid.” He waved his hand to shut her up. “Those rules don’t apply to me.”

She locked her jaw down, dropping her face of expression. “Very well. I have chores. Excuse me.”

As she turned to leave, Arthur snatched her arm, swinging her back around and shoved her against the wall. He leant closer in a manner he thought was exciting, pressing his chest against her shoulder and barricading her between his two arms. “I won’t be long. They won’t even notice you’re missing. Still looks like no one has even bothered to try and match my bid. Who knew you were going to be so cheap.”

Forget the chiming, her world felt as though it was imploding. The school halls felt as narrow as his grip, as close as his lingering breath. It took everything in her control not to jump out the window. “A lot can happen in seven days.”

His eyebrow arched. “It’ll be the shortest week of your life.” He inched in closer and Elizabeth clenched the bucket to her chest. He grinned at her trembling grip. “When you’re with me, you’ll forget all about your pathetic life in this poor excuse of an institution.”

Born in Melbourne Australia, Jacinta Maree considers herself a chocoholic with an obsession with dragons and Japan. Published in 2012 to USA publisher Staccato Publishing, Jacinta writes a variety of genres from YA paranormal, steampunk, horror and fantasy. Winner of 2014 Horror of the year and best selling author, Jacinta writes to answer all of her absurd questions and to explore themes and characters not often seen in main media.